In most US cities, a visitor can stay in a downtown area and expect to find most attractions nearby.

Not in Los Angeles (LA).

Built by the automobile lobby, Los Angeles was initially created as a driving haven for gear-heads and car lovers.

They wanted to get away from the traffic-heavy, snowy east coast, a wintry labyrinth made difficult for driving.

So they escaped to sunny Southern California, where one could cruise from the Mojave Desert to the Pacific Ocean.

As LA developed, it became an urban sprawl with few designated city centers in Downtown LA, Hollywood, and Santa Monica.

Hence, city planners located most of the attractions and several transit hubs in these three areas.

These two neighborhoods and one beach city are perfect places for visitors looking to get around Los Angeles without a car.

Think of these three neighborhoods as your must-visit during your first trip to Los Angeles!

Per the map below, many Los Angeles light rails cross through these three communities with easy access to other neighborhoods and attractions. 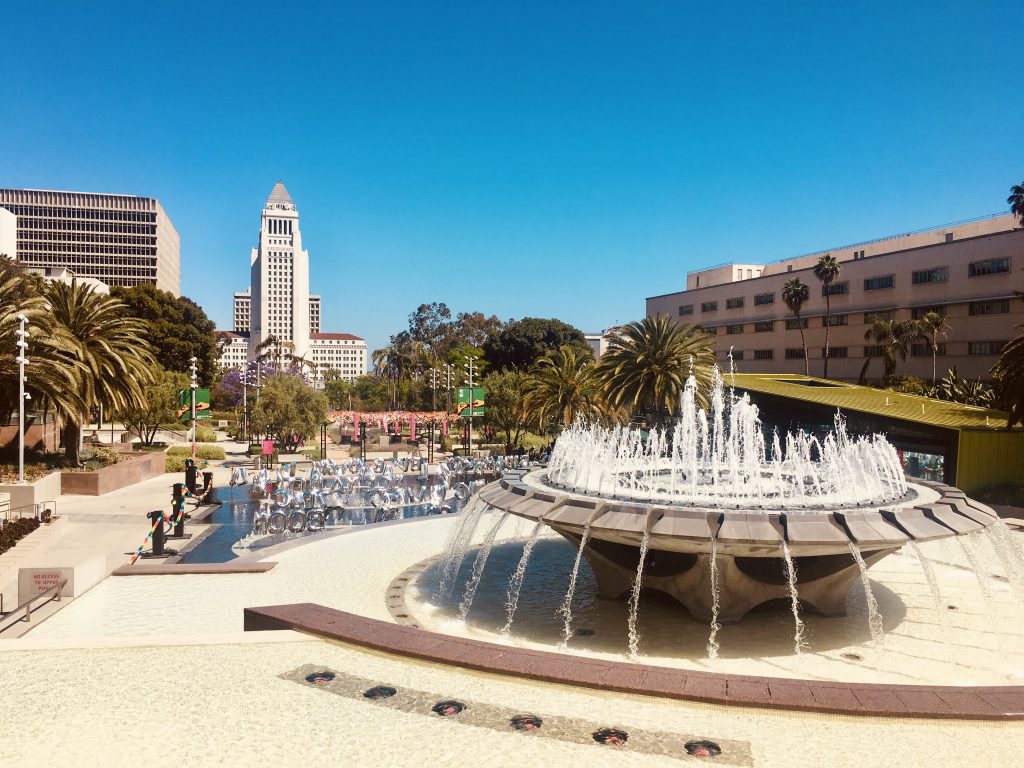 If you look at the light railway and subway maps below, most public transportation connect to Union Station, DTLA’s central transit hub.

DTLA is where the Staples Center in located, home of the Los Angeles Lakers, Clippers, and Kings.

You can also find museums, a cathedral, amazing restaurants, and the Grand Central Market, a unique food court full of many exotic and delicious meal options.

DTLA is also home to the historical Little Tokyo, a Japanese-cultured neighborhood, as well as the famous Chinatown, where such films as Rush Hour, 48 Hours, and Lethal Weapon 4 were filmed.

In DTLA, you’ll find the Yellow, Red, and Silver line and can connect to the Orange, Blue, Green, and Expo line.

Many of the hotels in DTLA are located near a metro light railway station, making your travels much more convenient.

If you’re looking to be in the center of all the transportation, this is it! 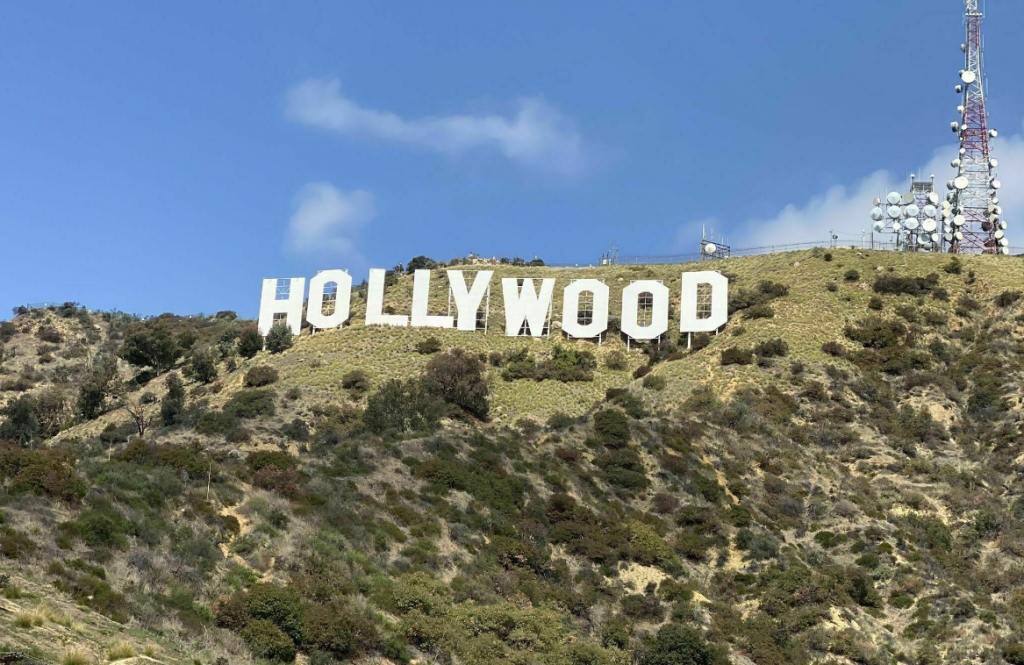 Hugely popular amongst tourists, Hollywood is actually only a neighborhood in the city of LA and not its own city.

In the early days, many of the movie studios were located in Hollywood, but have since moved to Burbank and other surrounding parts of LA in order to find more room to build bigger sound stages and backlots.

If you’re looking to tour a studio, there are four studios to choose from.

However many of the smaller, historic studios are still located around Hollywood, such as Paramount Studios and Raleigh Studios, located right across the street.

Hollywood is also home to many great comedy clubs, such as The Improv and The Comedy Store, that gave many aspiring comedians their start.

Not only that, you can find many dance clubs, bars, live theaters, and restaurants around this lively neighborhood.

Out of the three areas, Hollywood has some of the most affordable prices for hotels and are near many metro light railway stations.

Major attractions include the Walk of Fame, the TCL Chinese Theater (aka Mann’s Chinese Theatre), the world-famous Dolby theater (where the Oscars are hosted), Jimmy Kimmel Live, and much more.

If you’re looking for an active night life, affordable hotels, and live performances located near convenient public transportation, you can’t get any better than Hollywood. 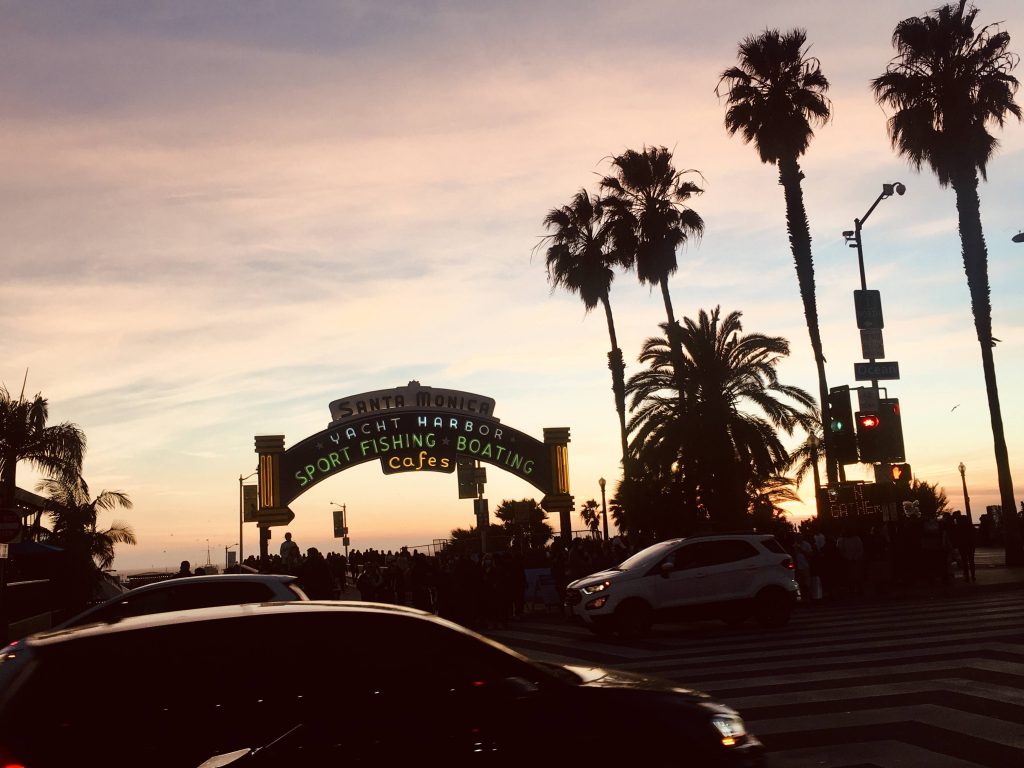 Located 15 miles west of DTLA, Santa Monica is one of Los Angeles’s most popular beach cities.

It is known to be very pedestrian and bike friendly.

It has one of the biggest outdoor malls in the Los Angeles area called the 3rd Street Promenade.

An amusement park sits right on the Santa Monica Pier, home to many fine bars and restaurants.

Also Santa Monica’s own Big Blue Bus line, which comes about every 30 minutes, connects travelers throughout the city.

If you’re looking to stay right on the beach, there are quite a few options!

The prices are bit higher than those more inland.

But if you want to be close to that fine ocean breeze, you’ll find many options.

Compared to Hollywood and DTLA, many of Santa Monica’s hotels are pricy, but convenient with hotels sprinkled near metro stations.

When taking the light rail way or bus, remember to look for the time when it runs.

Most buses may start operating at 6 am, but end by 8 pm.

Take public transportation in the daytime to explore other neighborhoods, then come back to where you’re staying around dinner time.

Most buses and light railways are quite safe in the daytime.

They are also pretty safe at night, but use your best judgement.

I personally wouldn’t want to take public transportation past 9 pm if I was traveling alone.

I’ve had no issue waiting for a bus at 6 am for 4+ years on a semi-busy street to get to work.

Welcome to LA by Foot!

Hi, I’m Lori and I have lived in Los Angeles (LA) for the past 30+ years and I love this city!

LA is about 10 times the size of New York City and with that size there are many neighborhoods and cities that make up the LA territory.

We’ll take each step together! Join me in my local travels and I’ll show you the best LA has to offer.